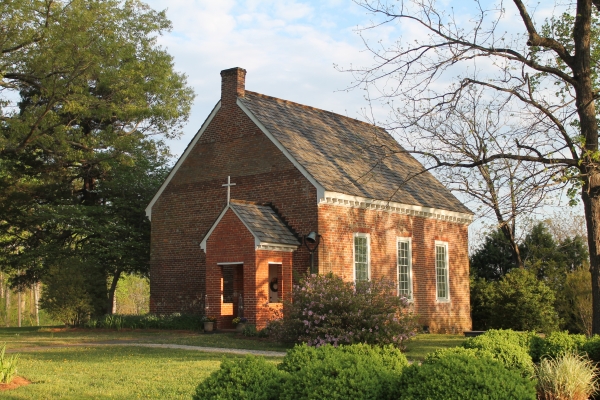 The Historic Chapel has a glorious history of survival. The northern two-thirds of the present building was built in 1774 as a transept to the original 1734 church. After the Revolutionary War, the church fell into disrepair and the original church was torn down and the southern third of the present building was added around 1825 to provide space for Hickory Neck Academy. The Academy also served various denominations as a place to worship before the Civil War. The war years were hard on Hickory Neck leaving it in near ruinous condition, but again, it was repaired and put back into service as a school. Eventually James City County erected a public school in Toano and our building was reconsecrated as an Episcopal church in 1917.

From the 1920s to the 1950s, furnishings for worship were reintegrated into the interior of this building. Much of this was accomplished by the women of the church through various fund raising events. Additionally, several old James City County families with long ties to the church were determined to see it survive and provided maintenance services as well as funds to keep the church doors open. Some interior renovation work was done in the 1980s, but after that time, the congregation began to grow rapidly. It got to the point that it was difficult to make necessary repairs because of the need to hold numerous services in the Historic Chapel, not a bad position for a congregation to be in, but a bad situation for the upkeep of the building.

Like all old buildings, repair needs are ongoing and can be extensive. Knowing that we were about to complete the New Chapel which would allow time to do necessary work on the Historic Chapel, the Vestry voted to create the Historic Chapel Preservation Fund in 2005 by taking a portion of a bequest to be the initial deposit. Soon after that, a family that had early association with Hickory Neck sent a contribution for preservation citing the special place that our church held in the lives of their family over several generations. From these beginnings, the fund has grown by generous contributions from current parishioners.

In the fall of 2007, we were finally able to start a major renovation/restoration project that has enhanced both the exterior and interior of the building. This work, with normal maintenance, should carry the structure well for a number of years. However, work on old buildings is never really finished as the roof was also recently replaced. Bequests/Gifts made to the Historic Chapel Preservation Fund are held until maintenance is required. Both the principal as well as any future earnings from the contribution may be used for the preservation of the Historic Chapel.

Make your checks payable to Hickory Neck Episcopal Church with "Historic Chapel Preservation Fund" on the Memo line. This fund is managed by our Parish Treasurer.