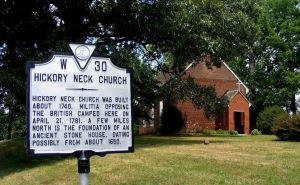 Hickory Neck traces its roots to 1734, but lives in the present. Our historic church, built in 1774, is still in active use; however, much of our spiritual life emanates from our new church, dedicated in 2006.

A Proud History, A Humble Beginning

Historic Hickory Neck Church’s oldest portion was built in 1734 on part of Hickory Neck Plantation. It was then known as the Lower (or easternmost) Church of ancient Blisland Parish, established prior to 1653. The elaborately built brick church was oriented east and west, in accord with Anglican tradition, and was served by the same clergy who provided spiritual leadership to the Parish’s Upper Church. In 1742 a walled yard was built around Hickory Neck Church and in 1744 a north transept was added to the original sanctuary. During the American Revolution, men from the opposing sides encamped in the churchyard and the Allies used the church as a military hospital. After the disestablishment of the Anglican Church, Hickory Neck stood vacant and gradually deteriorated. In 1825 Virginia’s General Assembly authorized the conversion of the old church into a schoolhouse. It was then that the 1734 component of the church was razed, the 1774 transept was enlarged, and its south end was bricked-up. Children attended classes in what became known as Hickory Neck Academy until the time of the Civil War. Interdenominational services often were held there on Sundays. In May 1862 Confederate soldiers withdrawing from Williamsburg encamped at Hickory Neck. After the war, the old Academy building was restored to use as a school that served all grades. In 1912 the James City County School Board deeded Hickory Neck’s lot and building to the trustees of the Hickory Neck Protestant Episcopal Church and once again, worship services were held. In 1972, Hickory Neck was declared a Virginia Historic Landmark and a year later it was added to the National Register of Historic Places.

There have probably been burials at Hickory Neck ever since the original building was completed around 1738 and the yard was walled in with brick in 1743. The now well-known sketch of the academy building done in 1862 by Union cartographer Robert Knox Sneden included numerous broken gravestones on the west side of the building. Mrs. Lucy James, who had been a student at Hickory…

The church's small mechanical action pipe organ is over 100 years old. The original portion, which includes the flat pedal board, was built in 1901 by Jesse Woodberry (1841-1922) for a Roman Catholic Church in New England. When the church decided it was no longer needed, the instrument sat in its basement for years until what was salvageable was acquired by the Organ Clearin…

A timeline of the parish and list of all clergy who have served since 1653.